Vancouver, British Columbia – Bearing Lithium Corp. (“Bearing” or the “Company“) (TSX Venture: BRZ) (OTCQB: BRGRF) (FRANKFURT: B6K1) is pleased to announce an update to the ongoing development work at the Maricunga lithium brine project in Chile, where it holds a 17.7% free-carried interest.

Further to the previous announcement (c.f. June 13th, 2017 press release), the Maricunga joint venture is currently working with tier 1 equipment suppliers including Veolia, GEA, Andritz and FLSmidth to undertake pilot plant test work utilizing brine sourced from the Maricunga project. Brine from the project has now been concentrated to a 5% lithium solution, with the subsequent pilot plant test work to produce lithium carbonate (Li2CO­­3) and potash (KCl) expected by the end of the year (Q4/17). The testwork is focused on optimizing the lithium and potassium production at the lowest cost process. Testwork is well advanced and in the coming months, final adjustments will be made to optimise the brine polishing sequence, which will also be completed by year-end 2017. The current process flow sheet diagram, which is subject to ongoing optimisation, is presented in Figure 1.

WorleyParsons has undertaken geotechnical sampling and site evaluation in the area where the evaporation ponds will be located to finalize pond design as part of the feasibility study. The project will use the conventional method of solar evaporation to pre-concentrate the brine before final processing into lithium carbonate and potash. The proposed location of the ponds is just north of the salar due to favorable local topography and availability of aggregate for pond construction.

WorleyParsons is well advanced on the design for the process plant and other site infrastructure, with the CAPEX and OPEX of the project anticipated with the release of the PFS in Q4/17. Preliminary results regarding these outcomes have been very promising. 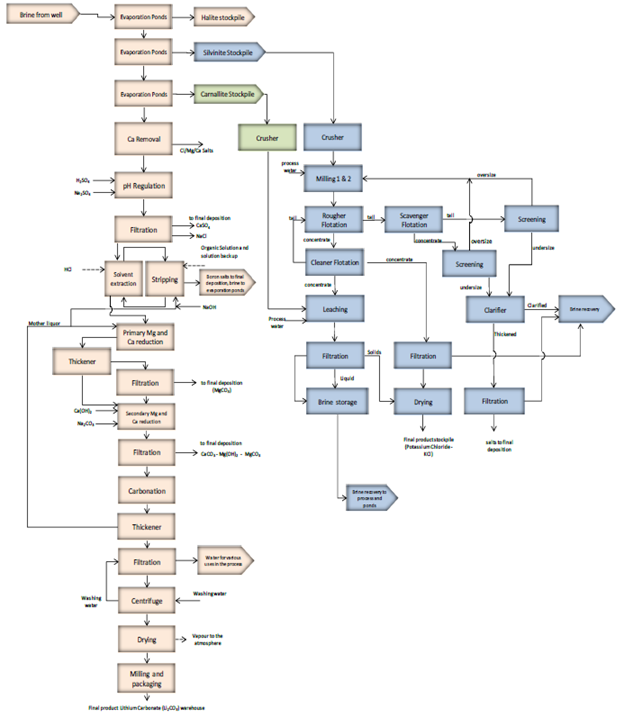 Jeremy Poirier, CEO of Bearing, commented: “after having completed the merger with Li3 Energy, our focus needs to be on working with our partners and the MSB management team to unlock the value of the Maricunga project.After the significant increase in resources highlighted by the recent NI 43-101 and JORC reports, the development program continued moving forward at a fast pace.The brine processing tests are going well and the PFS and EIA are on schedule.The importance of the hydrogeological model cannot be understated as it forms the basis for any future exploitation of the salar.Maricunga is the only project in the salar that has this work at such an advanced stage.We commend the work of the MSB management team to date and look forward to providing further updates.”

Don Hains, P.Geo., who is a technical consultant to the Company and is a qualified person within the context of National Instrument 43-101, has read and takes responsibility for this news release.

Bearing Lithium Corp. is a mineral exploration and development company, primarily focused on lithium. Its primary asset is a free-carried 17.7% interest in the Maricunga lithium brine project in Chile. The Maricunga project represents one of the highest-grade lithium brine salars globally and the only pre-production project in Chile. Over US$30 million has been invested in the project to date and all expenditures through 2018, including the delivery of a Definitive Feasibility Study in H1/18, are fully-funded by their earn-in joint-venture partner. Bearing also holds a portfolio of grass-roots exploration projects in the gold district of the Yukon, which are currently optioned to Golden Predator, and a lithium project in Nevada, which is currently optioned to First Division Ventures Inc.

Bearing Lithium Corp. is a lithium-focused mineral exploration and development company. Its primary asset is a 17.14% interest in the Maricunga lithium brine project in Chile.