(TSX Venture:BRZ) (OTCQB:BLILF) is pleased to provide a significant update on the advanced progress of the Maricunga Lithium Project in Chile as announced by MSB today. The Maricunga project, the highest-grade, undevelopedlithium project in Chile, is managed by Minera Salar Blanco (MSB) which is owned by Lithium Power International Limited (LPI) (51%), Borda Group (31%) and Bearing Lithium (BRZ) (18%).

MSB and its three owners (LPI, Borda Group, and Bearing) has decided to advance the low cost Maricunga Lithium Brine Project in a number of stages by fast-tracking a first stage development. This development strategy will be undertaken as MSB also continues to pursue the original and larger project.

The initial development stage will be based on the properties known as ‘Old Code’ concessions. These licenses are grandfathered from the current lithium legislation and do not require any further significant permitting for lithium production.

The decision to advance this development plan is based partly on the positive global outlook for the lithium industry, and the Maricunga project’s exceptional position as a potential world-class operation. It is also being taken after considering the impact that COVID-19 has had on discussions with Chile’s state-owned mining company, Codelco, under MSB’s Memorandum of Understanding. Codelco is reviewing the Maricunga project with a view on how best to develop the entire Maricunga salar under joint ownership.

The first stage of the project (Figure 1) will have a name plate capacity of 15,000 tonnes per year of high-quality lithium carbonate over a 20-year mine life. It will also provide significant future expansion potential from subsequent stages.

Brine from the exploration target below 200m could potentially convert to reserves after additional confirmation drilling, as could existing brine resources within MSB’s New Code concessions on the salar. Stage One will also provide a strong foundation for substantial consolidation opportunities for MSB and other parties on the Maricunga Salar.

The resource contained in these properties is included in the previously released NI43-101 and JORC resource statements (Definitive Feasibility Study of MSB Blanco Lithium Carbonate Project; 17 January 2019) that are part of the Definitive Feasibility Study.The exploitation of the lithium brine within the Old Code concessions is also included in the approved project EIA along with the existing Chilean Nuclear Commission (CCHEN) permits.

Most importantly, having received all of the required Chilean Government development and environmental approvals necessary for the start of construction, the key decisions for the development of Stage One now lie solely with MSB and its owners. Stage One represents a lower capital expenditure, fully permitted project that can take advantage of future developments in the global lithium industry.

MSB remains committed to evaluating and progressing alternative development plans for the subsequent stages with Codelco and the Chilean authorities. This will advance the original strategy to consolidate the Maricunga Salar by developing the remainder of the mining concessions, known as the New Code concessions, to provide substantial future growth for the project.

Work is already underway with MSB’s highly credentialed technical team and partners Worley Parsons, GEA, Stantec (formally MKH) and Atacama Water (formerly Flosolutions), among others to update the detailed engineering work to re-size and optimize the project to its revised output and specifications.

This involves a comprehensive internal review of the project’s technical and economic design. It will include further drilling to increase resources to a depth of 400m on the Old Code properties, adding to the 380m hole completed during the 2018 drilling program. Reported results will be in in accordance with JORC and NI 43-101 international standards.

Special focus will be on the optionality provided by the Stage One as a starter project that would allow future rapid expansion incorporating exploitation of the New Code concessions.

Recent work on the Engineering, Procurement and Construction (EPC) bidding processes is advancing with two major international engineering companies, as are several alternatives for project financing. They will be adjusted to take into account the updated Stage One design.

Engineering and financing activities will ensure continuity in the fast tracking of the development during the first half of 2021. A construction decision is expected to be made shortly thereafter.

In August 2019, in parallel with the approval process for the EIA of the project, MSB announced the execution of a non-binding Memorandum of Understanding (MOU) to jointly develop its Maricunga properties with those on the Maricunga Salar owned by Codelco.

After signing the MOU, Codelco began its due diligence of MSB’s extensive development program for the project. However, that process was substantially impacted by socio-political unrest in Chile during 2019 and 2020 and was further impacted by the COVID-19 pandemic. This resulted in significant delays, discussions and technical due diligence were likely to continue longer than expected by both parties.

As such, the parties have been unable to advance towards a definitive agreement in a timely manner. Therefore, the decision was made by MSB and its shareholders to progress with the staged development approach by initially developing the ‘Old Code’ concessions.

MSB continues to engage and collaborate with Codelco. It will also continue to engage with other parties regarding the consolidation of the Maricunga Salar lithium concessions for a possible development of a larger future lithium project.

MSB continues to enjoy the strong support of the Chilean government for its development of the Maricunga project. To stimulate economic development and support the economy following the impacts of COVID-19, the Chilean Government is promoting several regional economic programs that could assist MSB in its new staged development approach.

Discussions have been held with several government authorities in recent weeks about alternatives to advance the project within the context of the economic programs.

“The Maricunga project has gone through many challenges.Today is no different, as the global pandemic continues to unfold. We initially envisioned a larger project that could, in the short term, have partly consolidated the Maricunga Salar. We now believe that a staged approach will provide a better outcome for the shareholders while minimizing further delays. The acceleration of the EV production in Europe and Asia confirms that high-quality projects like Maricunga are required to supply the many battery factories already under construction.

The revised project is smaller than the previous announced development, but the decision to advance with Stage One reflects the world class nature of the project. It will provide maximum shareholder value as soon as possible “ 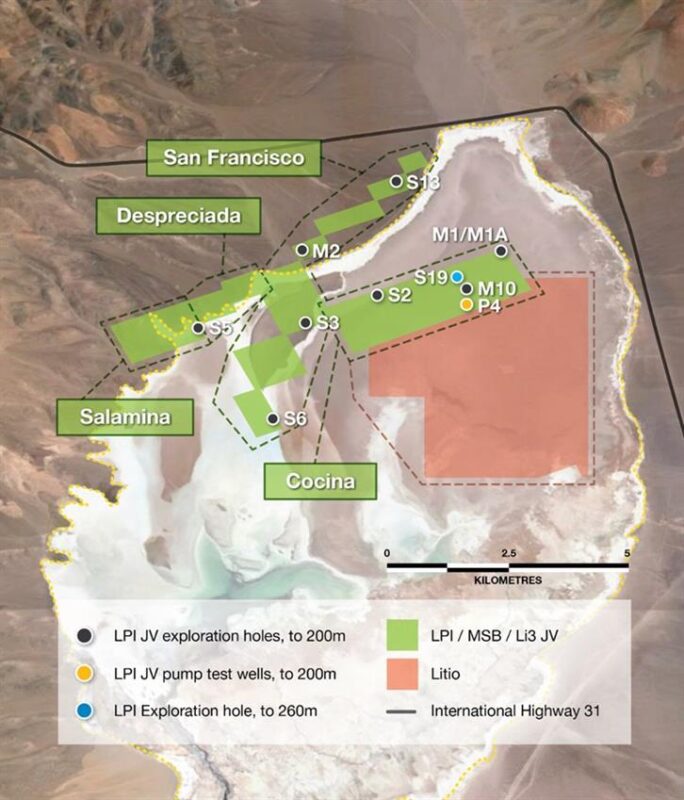 Figure 1 – The ‘Stage One’ project

Bearing Lithium Corp. is a lithium-focused mineral exploration and development company. Its primary asset is a 17.35% interest in the Maricunga Lithium Brine Project in Chile. The Maricunga Project represents one of the highest-grade lithium brine salars globally and the only pre-production project in Chile. Over $US 58 million has been invested in the Maricunga Project to date including $US 3 million in November 2020. All Project Expenditures through to the delivery of a Definitive Feasibility Study in January 2019 have been fully funded by the 51% earn-in joint-venture partner, Lithium Power International. Subsequently, the Company has subscribed for shares in MSB amounting to $US 1,261,421 for Fiscal Year 2019 and $US 782,081 for Fiscal Year 2020.