Bearing Lithium Corp. (“BRZ” or the “Company”) is pleased to provide an update on exploration activities and the preliminary results from the Maricunga Project, located in Chile.

As announced on January 27, 2021, the Company commenced additional exploration at the Maricunga Project with the aim of expanding the current resource, which is from near surface to 200m depth, to include the interval between 200m and 400m.

Minera Salar Blanco (“MSB”) has now completed the first two of five diamond core hole (S-25 and S-26) to the target depth of 400m ahead of schedule, with undisturbed core samples collected and sent for analysis in 200m to 400m intervals for laboratory measurement of drainable porosity and other hydraulic parameters.

MSB has also undertaken positive preliminary field analysis which will provide valuable information.The geological structure expected have been confirmed for the interval, with the sequence of coarse grained NW Alluvial sediments, followed by the Upper Volcanoclastics, the Lower Sands and the Lower Volcanoclastics. These units confirm the existing hydrogeological model of the area, all with favourable specific yield and permeability characteristics.

In addition, results from the samples collected at 12m intervals during the drilling have shown positive brine density, with preliminary measurements at the wellhead indicating higher lithium concentrations.

Holes S-25 and S-26 were completed as monitoring wells to a depth of 400m, and will be used as observation wells during the long-term pumping test planned in adjacent production well P-5.

Drilling for the project’s 2019 Definitive Feasibility Study, established that there was a thick sequence of volcaniclastic material (established by MSB’s historical S-19 exploration hole drilled to 362m, Figure 1) beneath gravel and near surface clay units in the “Old Code” concessions. This zone has high drainable porosity and permeability that is considerably higher than near surface units. It is expected that the new expansion of project brine reserve supports the 20 year-plus mine life for the project. 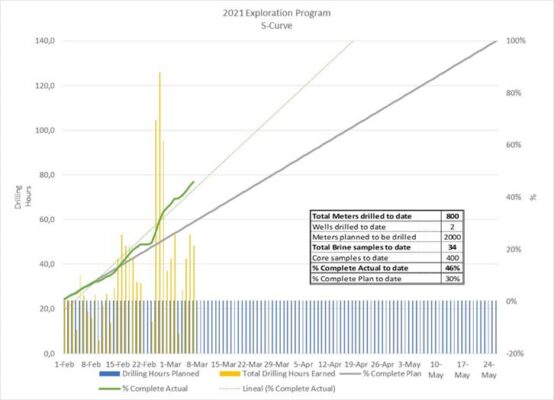 Optimisation of the production process continues with GEA Messo in Germany, with basic engineering already commenced for the re-sizing of the plant. Detailed scope of work for Worley already defined. Activities expected to commence during April. 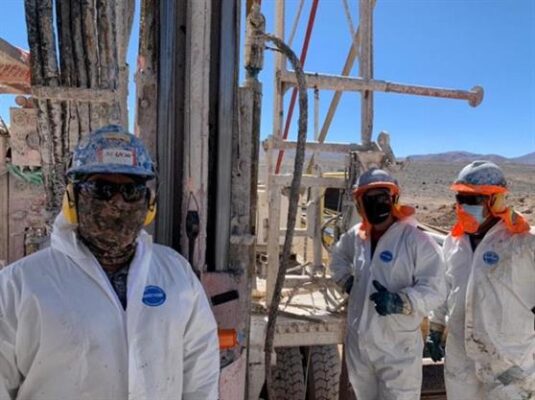 We are pleased with the positive preliminary results on the resource expansion and field analysis, with the completion of the first two drill holes. This confirms the expected geological structure for the exploration interval, as well as the existing hydrogeological model of the area. Activities are continuing as planned and we remain ahead of schedule for exploration program.

Bearing Lithium Corp. is a lithium-focused mineral exploration and development company. Its primary asset is a 17.35% interest in the Maricunga Lithium Brine Project in Chile. The Maricunga Project represents one of the highest-grade lithium brine salars globally and the only pre-production project in Chile. Over $US 60 million has been invested by the partners in the MSB Joint-Venture (Maricunga Project) to date including $US 2 million in March 2021. All Project Expenditures through to the delivery of a Definitive Feasibility Study in January 2019 have been fully funded by the 51% earn-in joint-venture partner, Lithium Power International.

Forward-looking statements are frequently, but not always, identified by words such as “expects”, “anticipates”, “believes”, “intends”, “estimates”, “potential”, “possible”, and similar expressions, or statements that events, conditions, or results “will”, “may”, “could”, or “should” occur or be achieved. Actual future results may differ materially. There can be no assurance that such statements will prove to be accurate, and actual results and future events could differ materially from those anticipated in such statements. Forward-looking statements reflect the beliefs, opinions and projections on the date the statements are made and are based upon a number of assumptions and estimates that, while considered reasonable by the Company, are inherently subject to significant business, economic, competitive, political and social uncertainties and contingencies. Many factors, both known and unknown, could cause actual results, performance or achievements to be materially different from the results, performance or achievements that are or may be expressed or implied by such forward-looking statements and the parties have made assumptions and estimates based on or related to many of these factors. Readers should not place undue reliance on the forward-looking statements and information contained in this news release concerning these times. Except as required by law, the Company does not assume any obligation to update the forward-looking statements of beliefs, opinions, projections, or other factors, should they change, except as required by law.

Bearing Lithium Corp. is a lithium-focused mineral exploration and development company. Its primary asset is a 17.14% interest in the Maricunga lithium brine project in Chile.