Bearing Lithium Corp. is pleased to provide an update on exploration activities and the preliminary results from the Maricunga Lithium Brine Project, located in Chile.

As announced on January 27, 2021, Minera Salar Blanco commenced additional exploration at the Maricunga Project with the aim of expanding the current resource, which is presently just from near surface to 200m depth, but will now include the interval between 200m and 400m.

Minera Salar Blanco has now completed three out of five diamond core holes (S-25, S-26, and S-27) to the target depth of 400m. The fourth core hole is now being drilled with completion of the fifth exploration hole is expected for early May, two weeks ahead of schedule.

The first set of 31 undisturbed core samples collected from holes S-25 and S-26 have been sent to the GeoSystems Analysis laboratories in Tucson, Arizona and the results of drainable porosity and other hydraulic parameters are expected by the middle of May.

Of a total of 56 brine samples collected at 12m intervals during the drilling, 20 samples have been sent to Andes Analytical Assay for analysis. Preliminary analysis shows average lithium concentrations above 1,000 ppm and positive lithium/calcium/magnesium ratios.

Optimisation of the production process continues with GEA Messo in Germany, with basic engineering already commenced for the re-sizing of the plant to 15, 000 t/a LCE production. Final tests for the Solvent Extraction (SX)Removal plant and for the Ion Exchange plant were finalized with Outotec (Finland) and Eurodia (France) respectively.

Exploration activities are on schedule as shown on the Exploration Program below (Figure 1). 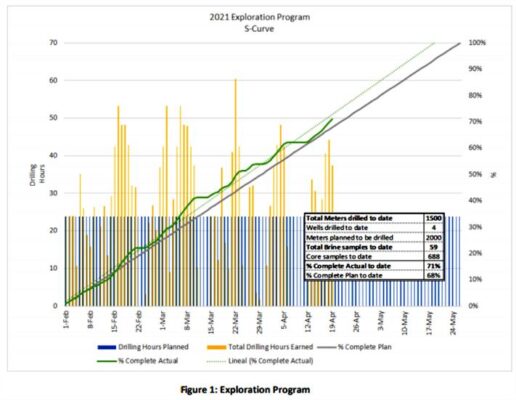 A 200m water well was also drilled by Andinor early April for freshwater testing activities. Drilling of a 400m deep production well for the long-term pump test planned continues and has reached a 35% stage of advancement. A third shift was now added by Andinor to continue with the schedule as projected. 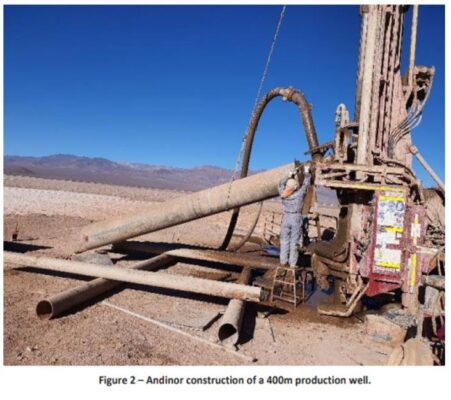 The kick-off meeting for the DFS update of the Stage One was conducted with Worley the first week of April. Several possible areas of improvement have been identified. Engineering work will focus initially on the re-sizing of the evaporation ponds where opportunities to reduce the capital expenditure related to this item have already been detected.

“We are very pleased with the positive results to date and the progress of the drilling activities with more 70% of the work completed. Commencement of the DFS update by Worley and the basic engineering by GEA will allow the planned schedule to be achieved.”

Bearing Lithium Corp. is a lithium-focused mineral exploration and development company. Its primary asset is a 17.35% interest in the Maricunga Lithium Brine Project in Chile. The Maricunga Project represents one of the highest-grade lithium brine salars globally and the only pre-production project in Chile. Over $US 60 million has been invested in the Maricunga Project. All Project Expenditures through to the delivery of a Definitive Feasibility Study in January 2019 have been fully funded by the 51% earn-in joint-venture partner, Lithium Power International.

Effective December 22, 2022, all of the issued and outstanding common shares of Bearing Lithium Corp. (“Bearing”) were acquired indirectly by way of a plan of arrangement by Lithium Power International Limited, a public company listed on the Australian Securities Exchange (ASX: LPI) (the “Arrangement”). Pursuant to the Arrangement, holders of  Bearing’s common shares (“Bearing Shares”) received  0.7  ordinary  shares  of  LPI  (“LPI  shares”) for  each  Bearing Share held,  subject  to  rounding.  All  outstanding  Bearing  stock  options  and  warrants  will  remain outstanding according to their original terms and expiry dates, and will be exercisable into LPI Shares subject to  the  ratio  of  0.7  LPI  Shares  for  one Bearing  Share.  In  addition,  holders of Bearing Shares on Bearing’s register at the time of closing are entitled to receive a cash distribution in the amount of approximately C$0.015 per Bearing Share.

Following the completion of the acquisition, effective at the close of business on December 23, 2022, Bearing’s common shares have been delisted from the TSX Venture Exchange. For more information regarding the Arrangement, please refer to Bearing’s press release dated December 22, 2022.