As announced on 27 January 2021, the Company commenced additional exploration at the Maricunga Salar as part of the updated DFS for its Stage One Project with the aim of expanding the current Measured + Indicated (M+I) resource. This currently is measured from near surface to 200m depth, but recent drilling will also include the interval between 200m and 400m.

MSB has completed additional five diamond core holes to the target depth of 400m as scheduled. As a result, the resource update for the Stage One mining concessions will be based on:

Positive results with average lithium concentrations of 989 mg/l and maximum values of 3,375 mg/l are shown in Table 1 below.

Location of the different exploration and production wells, as well as of the geological traces are shown on Figure 1 below. 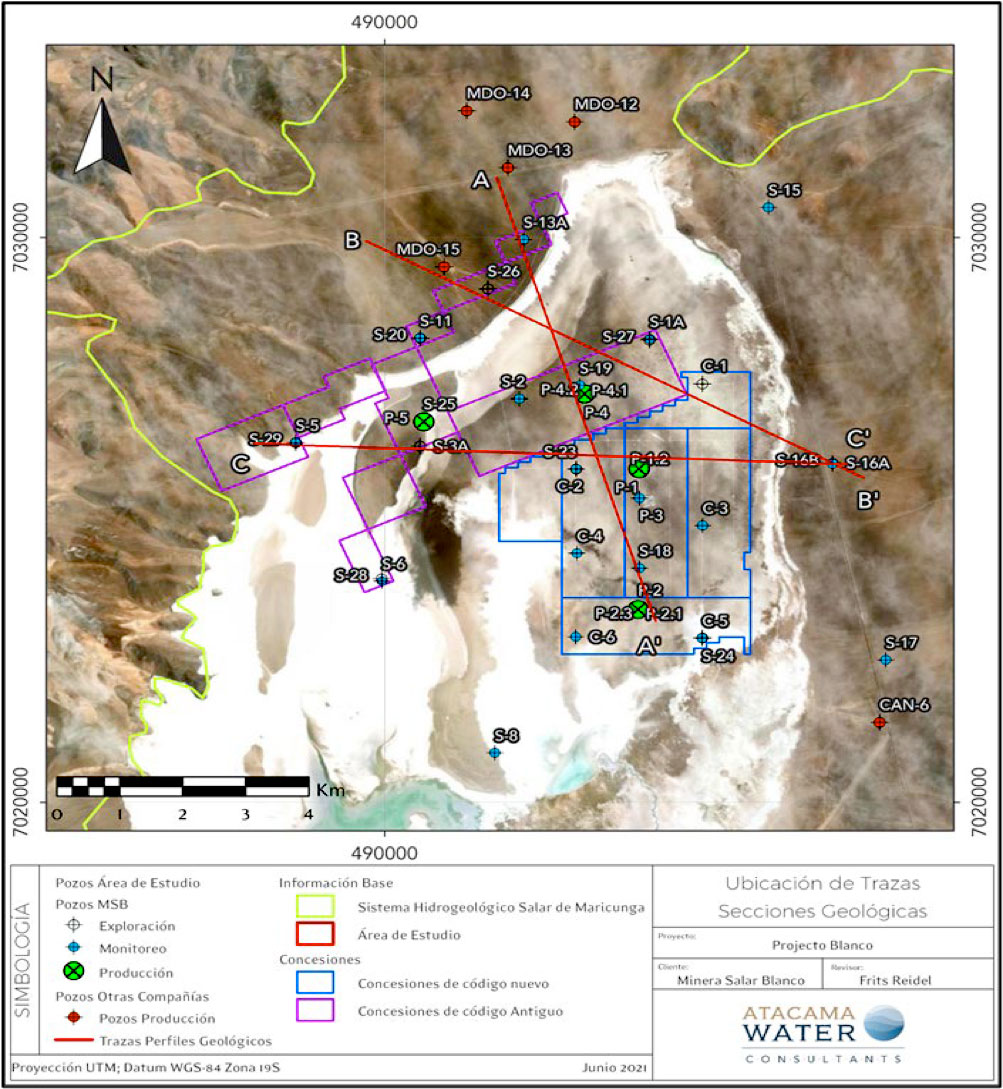 A new Resource (M+I) estimate is in process, including the additional information to 400m depth, using SGeMS software as a base for the new Reserve estimate update which will be part of the updated DFS for Stage One. A significant resource expansion is expected to be between the range of 1.5x to 1.8x the 2019 values[1] . 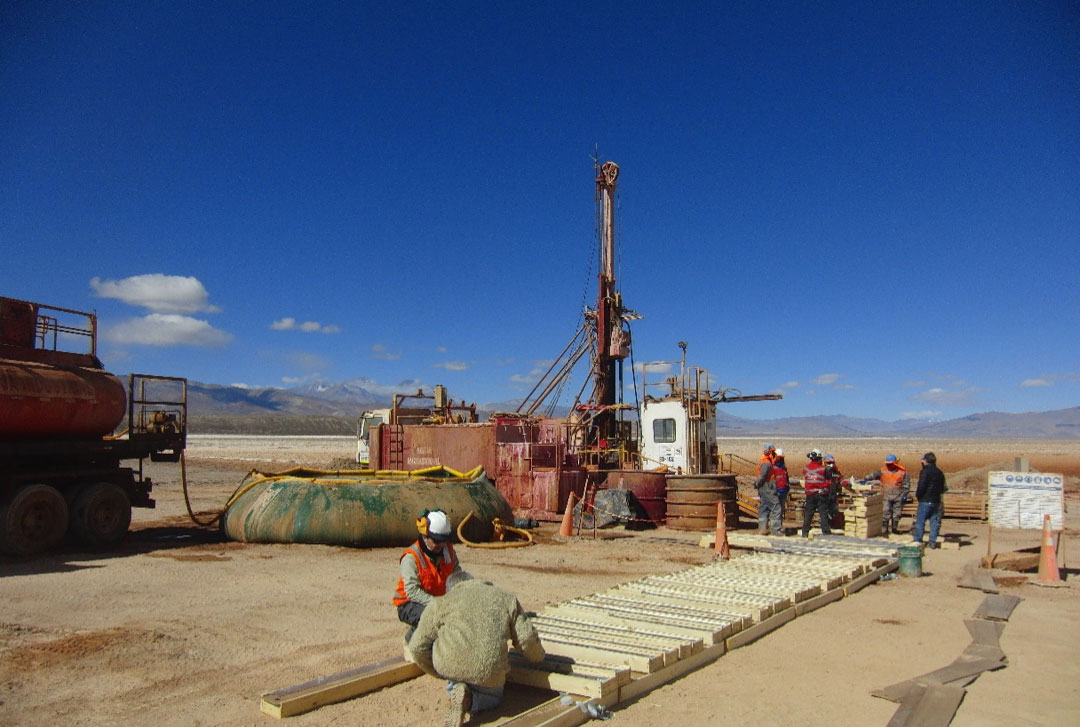 The DFS update continues to advance as planned by Worley (Engineering) and GEA Messo (Production Process). Several opportunities for optimisation have been identified in the engineering, with potential reduction also in the CAPEX of the project.

The Company has advanced further on its production process with significant efficiency increases. As part of the finance and commercial activities, new samples of high-quality battery grade Lithium Carbonate will be produced at GEA Labs in France for review by off-takers after the Basic Engineering is completed by the end of September. Purity is expected to be significantly higher compared with the original samples produced in 2018. They showed a 99.5% purity. Such an outcome would allow the Company to reach a wider spectrum of customers with different quality requirements in the future.

Financing activities have continued, with the Mitsui agreement for off-take and funding serving as a solid base.

A recovery in lithium prices, especially for battery grade lithium carbonate, along with the off-take agreed with Mitsui have had a positive impact on the expected level of leverage the project could support. The Company is now targeting a 50 per cent leverage for the project with a lower cost debt structure.

Lithium carbonate battery grade is now trading at $US14,000 per tonne in China, Japan and Korea, as shown below in Figure 3 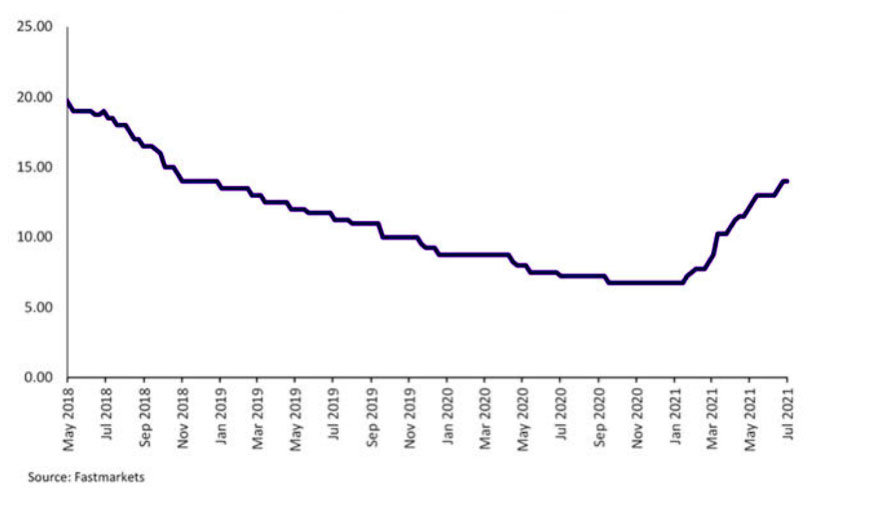 As EV roll-out intensifies and electrification becomes a significant focus for governments, the scrutiny of lithium producers’ initiatives to minimise environmental impacts have been growing.

Sustainability has always been the centre of the Maricunga project. The company has made important efforts to become one of the first Zero Emission lithium brine producers. That includes minimising the water consumption of the production process design (self-producing more than 30 per cent of water used); using electricity only produced by solar generators through long term power purchase agreements; and having strict protocols to ensure any negative impact on the area have provided an opportunity to set a high standard in the industry. Additionally, the social aspect has been important

to the Maricunga project, having received open and ongoing support from both indigenous and civilian communities. All of these aspects have been widely recognised by the Chilean authorities.

The Company has initiated the process to review and certify its Environmental Social and Governance protocols. Proposals from specialised advisors are expected to be received during Q3 for the review of all the project information, as well as its carbon footprint metrics.

“We are pleased with the positive results to date. We look forward to continuing advancement on all fronts as we progress the Maricunga Stage One project towards a successful outcome.”

ON BEHALF OF THE BEARING LITHIUM BOARD

Effective December 22, 2022, all of the issued and outstanding common shares of Bearing Lithium Corp. (“Bearing”) were acquired indirectly by way of a plan of arrangement by Lithium Power International Limited, a public company listed on the Australian Securities Exchange (ASX: LPI) (the “Arrangement”). Pursuant to the Arrangement, holders of  Bearing’s common shares (“Bearing Shares”) received  0.7  ordinary  shares  of  LPI  (“LPI  shares”) for  each  Bearing Share held,  subject  to  rounding.  All  outstanding  Bearing  stock  options  and  warrants  will  remain outstanding according to their original terms and expiry dates, and will be exercisable into LPI Shares subject to  the  ratio  of  0.7  LPI  Shares  for  one Bearing  Share.  In  addition,  holders of Bearing Shares on Bearing’s register at the time of closing are entitled to receive a cash distribution in the amount of approximately C$0.015 per Bearing Share.

Following the completion of the acquisition, effective at the close of business on December 23, 2022, Bearing’s common shares have been delisted from the TSX Venture Exchange. For more information regarding the Arrangement, please refer to Bearing’s press release dated December 22, 2022.